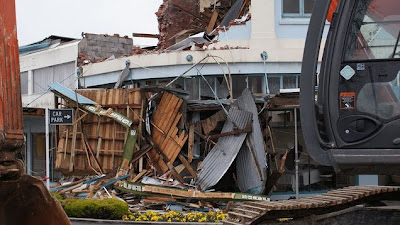 One thing the devastating Canterbury earthquake has shown us is that in the worst of times, you see the best of New Zealand. I have spent as much time as possible in the area since the earthquake hit, and the generosity of people pitching in to help their neighbours has been overwhelming.
In true Kiwi spirit, Canterbury farmers have not only been dealing with damage to their own properties, but also helping out their mates. Within hours of the quake, dairy farms were sharing generators to get cows milked and I heard of one shed designed for 400 cows milking 2000 over 24 hours.

There is a lot to do before life is back to normal for many Cantabrians, but they are not alone - the whole of New Zealand is behind them. Special legislation has been passed giving the Government powers to get the region back on its feet as soon as possible. In rural Canterbury, we have appointed an experienced rural emergency coordinator to oversee recovery efforts on farm properties, working with the newly-established Regional Rural Recovery Group.

It will take a long time to work through the damage caused by the earthquake. But everyone involved in the emergency response is doing a fantastic job. The Government is committed to rebuilding Canterbury and we will get the job done.
Posted by David Carter at 4:59 PM