The future for New Zealand’s irrigation infrastructure has strengthened with the Irrigation Acceleration Fund now open for business.
Announced as part of Budget 2011, the Irrigation Acceleration Fund provides $35 million over five years to support the development of proposals to the ‘investment ready’ prospectus ready stage.
The development of smart irrigation infrastructure will boost economic development and also contribute to the sustainable growth of our primary sectors.
NZIER research shows the fund could support 340,000ha of new irrigation which could boost exports by $1.4 billion a year by 2018, rising to $4 billion a year by 2026. But this is not about irrigation at all costs.
One of our greatest competitive advantages is water. It’s our “liquid gold”. But to date we have not done a good enough job of storing, allocating and utilising this wonderful resource.
The Irrigation Acceleration Fund provides an opportunity to develop new water infrastructure proposals that promote efficient water use and good environmental management.
Irrigation good practice is essential if we are to protect our vital water resource for tomorrow.
Posted by David Carter at 12:00 PM No comments:

Canterbury Earthquake: One year on... 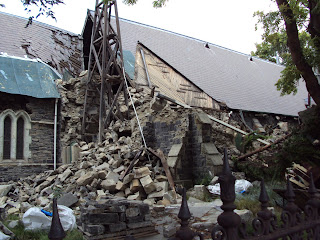 One year on from the Canterbury earthquakes and few of us can forget the shattering images and the enormous grief suffered by so many people over that time.

As a Christchurch MP, this has been particularly close to home.

In the face of the two major earthquakes and thousands of aftershocks, the province has come a long way since 4 September 2010. There is a lot to do before life is back to normal for many Cantabrians, but real progress is being made.

I was in Auckland when the September quake struck but I got back to Canterbury within hours.  In our rural areas of Selwyn and Banks Peninsula, it was shocking to see historic homes destroyed, grain silos tipped over and milking platforms severely damaged.

But there was more to come in February when so many lives were shattered by the severe quake that struck Christchurch City.

The Government remains totally committed to rebuilding Christchurch and its surrounds.  A year ago I said that the quake showed us that in the worst of times, you see the best of New Zealanders.  The generosity of people pitching in to help has been amazing.

This has been the toughest year for many people, but good progress is being made.

I want to assure you that the Government will continue to support the Christchurch rebuild in every way possible.

A draft Recovery Strategy just released for public consultation sets out a proposed direction and priorities for the recovery of greater Christchurch. I encourage you to have your say on the future of our region by commenting on the Strategy at www.cera.govt.nz.
Posted by David Carter at 1:56 PM No comments: