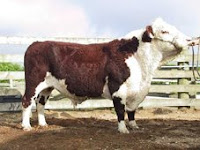 I finished a full-on day in Hamilton last week with a bull parade. Some of New Zealand’s top dairy stud bulls were on display at a re-branding launch for the company CRV AmBreed.

These impressive beasts are vital in the production of superior dairy cows.

Genetic innovation results not only in increased productivity gain but has the potential to solve some of the challenges agriculture faces.

Climate change obligations and environmental expectations are just some of the hurdles. Increasingly, society and international markets are demanding proven environmental sustainability.

We are yet to find the solution when it comes to animal emissions. Solutions to these issues we face will result from the use of natural resources including genetics and the generation of new ideas through research and innovation.

Companies such as CRV AmBreed and Livestock Improvement Corporation (LIC) are underpinning the future and prosperity of New Zealand agriculture with their world-leading deployment of cutting edge technologies and practises.

New Zealand has a crucial role to play in the international genetics market.
These companies are a critical part of the international mix, not just for the export potential, but for the opportunity to effectively serve the world’s best dairy farmers.
Posted by David Carter at 1:45 PM No comments:

Over the past 30 years I have observed maize becoming an important component of New Zealand's primary sectors.

Maize silage is now an integral part of the dairying system in New Zealand. It provides a good supplement to pasture, keeping stock in condition when pasture is limited, and it helps to increase milk production.

Last year both the maize and dairy industries were booming. Record payouts for milk solids, combined with drought meant that demand for silage in 2008 often outstripped the available supply. Prices were high. This year with a falling milk payout and better climatic conditions demand for silage has reduced.

I have been disappointed to hear of deals between maize growers and dairy producers being reneged on. This sort of behaviour does not bode well for either growers or buyers and is poor business practice. I encourage both the maize and dairy industries to look long-term and work together to weather these economically challenging times.
Posted by David Carter at 1:29 PM No comments:

I spent a lot of time in airports last week. Getting from Wellington to the Australian capital, Canberra and back again is not straightforward. It did mean I had space for a couple of media interviews and a chance to chat with the Director General of the Ministry of Agriculture and Forestry, Murray Sherwin, who accompanied me.

The trip to Australia was about building those important trans-Tasman relationships. New Zealand has many common issues with our neighbour and it is very important we have face-to-face talks.

I met with my counterpart, the Australian Minister of Agriculture Tony Burke who is an up-and-comer in the Government over there. The agenda was wide ranging. Australia and New Zealand share many issues of concern for the primary sector including drought management, water storage, climate change, free trade and biosecurity.

I also met with Leader of the Opposition, Malcolm Turnbull. We compared notes on the economic state of the primary sectors in our two countries as part of a broader discussion on the challenging state of the global economy.

After my meeting with Mr Turnbull I attended Question Time. The Australian system is different to New Zealand to I was interested in how the process there worked.

Now in New Zealand again I am back into the swing of things with the House sitting and Question Time kicking off today.

One of the other interesting meetings I had while in Australia was with officials of the organisation that runs the National Livestock Identification System. These animal tracing systems are generating discussion on both sides of the Tasman.

New Zealand is currently looking at implementing such a system labelled NAIT. The scheme would provide a lifetime traceability of individual animals. The NAIT proposal is one tool that will meet the growing requirements of our trading partners, as well as improve New Zealand's ability to manage new incursions and existing pests and diseases.

It is currently undergoing a second stage business study which is due out in July. Until the full cost/benefit analysis of the scheme is complete the Government won’t be making a final commitment. More >>
Posted by David Carter at 10:43 AM No comments:

I had the family in tow yesterday. They don’t often come to the Capital.

Some MPs shift their families to Wellington but when I became an MP we made a conscious decision that home was Canterbury. It means I work out of the Christchurch office most Fridays and am home on the weekends.Listen to more about life on the farm >>

We had the first official caucus catch-up of the year yesterday - an all day meeting at Premier House, the Prime Minister’s official residence.

The Prime Minister is really on top of things. He is certainly showing himself as a leader; everyone is in step.

The new Government knows what it wants to achieve. The announcement on the Resource Management Act reform covers one of the things we promised to fix at election time. We are making progress fast.

Farmers from around the country have been crying out for change for years. I know my personal experiences with the Act on Banks Peninsula have been far from satisfactory.

Changes to the Resource Management Act will simplify and streamline processes without compromising environmental protections.

The Resource Management (Simplify & Streamline) Amendment Bill, which contains more than 100 amendments, will be introduced to Parliament later in February and referred to the Environment and Local Government Select Committee for public submission and hearings.

A further phase of reform of the RMA is planned addressing specific areas of concern covering aquaculture, the structure of the Environmental Protection Authority, fresh water management, and urban design and infrastructure issues. More on RMA reform >>
Posted by David Carter at 10:46 AM No comments:

I was in Palmerston North last week and visited Massey University.

I was really impressed, the science and innovation coming out of there is incredible.

We have some bright, young things way ahead of the game, it was great to see.

Part of my visit included a tour of the Institute of Veterinary Animal and Biomedical Sciences where I met some veterinary students and a dog named Patch - a blue heeler-border collie cross from one of the University farms.

I know from my own personal experience many rural areas have inadequate veterinary services.

This shortage poses a threat to our pastoral farming model and is a major concern of the New Zealand Veterinarian Association.

As the Minister of Agriculture I recognise the contribution vets make to New Zealand’s primary sector and am keen to assist in retention of vets in rural areas.

The Government has consulted closely with Massey and New Zealand Veterinarian Association to design a bonding scheme for vets who are prepared to work in hard to staff rural areas.

The bonding initiative is expected to be implemented shortly.